Since it regained control over wide swathes of the southern Idlib countryside in late 2019, the Syrian government has deliberately transformed the city of Khan Sheikhoun into an administrative centre for Idlib governorate, while the opposition maintains control over Idlib city.

In mid-November, the secretary of the Baath Party branch in Idlib inspected a school in Khan Sheikhoun that was undergoing work to be converted into a temporary party headquarters for the city, which is now empty of most residents.

Khan Sheikhoun is the third largest city in Idlib governorate after Idlib city and Maaret Al-Numan. It is located along the border with Hama governorate, and the M5 Aleppo-Lattakia highway cuts through the centre of the city. Regime forces captured the city on August 23, 2019, displacing around 30,000 people from their homes. They fled to northern Idlib, where the opposition is still in control. Currently, around 100 families live in Khan Sheikhoun’s eastern neighbourhood, after returning to their homes from regime territory.

The Baath Party’s choice of a school building to house its Idlib branch suggests that it is unlikely that displaced students, and their families, will return to the city in the foreseeable future.

Since the end of 2019, the government has released official statements saying plans are in place to establish a government complex in Khan Sheikhoun that includes all the departments and public institutions for Idlib governorate.

However, private property seizures continue for the purpose of setting up headquarters for state institutions. The home of one former resident, Rifaat Sarmani, has served as a police headquarters since April. Likewise, a traffic police headquarters, a water department and a water unit were set up in civilian homes that had been seized. All these official departments are still inoperational, as the city has yet to receive electricity and water service.

Despite the presence of approximately 30 government buildings and old schools in Khan Sheikhoun, regime forces have converted about 50 additional homes into military bases, mostly on the outskirts of the city. As for the houses that were not taken over by the regime, they were looted, similarly to what happened in Saraqib and Maaret Al-Numan.

Pro-regime militias divided up Khan Sheikhoun. Iranian militias made their headquarters in the western neighbourhood, while the 25th Division, loyal to Russia and led by Brigadier General Suheil Hassan, took over properties along the M5 Aleppo-Lattakia highway. 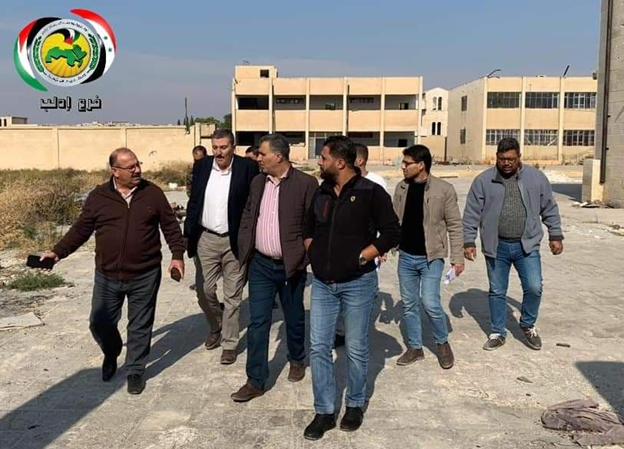