In the first step of its kind, an opposition-affiliated municipal council in northern Syria adopted zoning plans made for the town when it was under Syrian government control. More importantly, the plans were adopted after obtaining the agreement of town residents, which may be the first time such a step has been taken since the Baath Party took over in 1963.

The municipal council of Al-Rai, a town north of Aleppo, announced that it had begun work to implement an expansion of its zoning plans. The expansion will include lands east of the town on either side of the “Eastern Highway”. The Eastern Highway is a road built in 2018 by Turkish construction companies to connect the Al-Rai border crossing, located just two kilometres east of the town, with the main highway to the city Al-Bab, circumventing Al-Rai altogether.

The expansion began with levelling and preparing the land and building roads. Sources close to the municipal council told a correspondent for The Syria Report in the area that the construction work has so far gone according to the general expansion plans, while the detailed plans were not yet complete.

Municipal authorities in Al-Rai are carrying out the expansion as the old zoning plans are no longer enough to accommodate the town’s increased population. Residents needed to expand residential and commercial construction on the outskirts of the town.

A municipal council official told The Syria Report that the zoning expansion plans will be implemented next year. He added that the expansion will be towards the eastern side of the town, where the Eastern Highway is located, because the land there is barren and rugged, and unsuitable for agriculture. The other outskirts of the town, however, are suitable for agriculture, and expanding there would damage the agricultural sector.

The council did not say how it will expropriate the real estate for the expansion project, nor how it would provide compensation. Those details were to be delayed until after release of the detailed zoning plans.

Lands in the expansion area are owned by the residents of Al-Rai. A source told The Syria Report that the decision to expand the town’s zoning plans came after consulting the owners of the land and discussing the details of the expansion. The landowners agreed to implement the plan because they will benefit from price increases after the area is converted into a real estate zone. In the first phase, water, electricity, and sewage networks will be connected to the area, and roads will be built.

Most residents of Al-Rai and its surrounding villages are Syrian Turkmen. The town extends to the border strip with Turkey. Opposition forces took control of the town in 2012, and after rebels entered Aleppo town that same year, many Turkmen residents from the neighbourhoods of Al-Holk, Al-Haydariyeh and Bustan Al-Basha fled to their original hometowns in the north, where Al-Rai became the most notable town to receive the displaced.

Rebels lost Al-Rai and its countryside to the Islamic State in 2014, before regaining it in 2017 as part of the Turkish-backed military campaign, Operation Euphrates Shield.

Al-Rai enjoys sizable Turkish support, including funding for its municipal council, which continues to develop various service sectors. The council also receives a large portion of its funding via revenues from the nearby border crossing, which it uses to finance projects, the most important of which is the zoning expansion plan. It has also established an industrial zone and developed the transportation networks, as well as the health, manufacturing, and shoe production sectors. 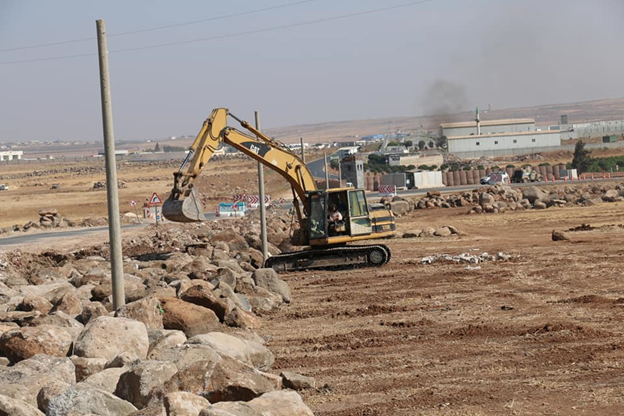