The past months have seen an increase in reprisals between armed militias of displaced Bedouin residents and local Druze militiamen in the vicinity of Qarayya in the southern part of the Suweida governorate. The reprisals have included kidnappings, killings and burning of crops.

Before 2011, about 350 Bedouin residents lived in majority-Druze Qarayya, most of them owning homes and land in the Karam Al-Wardeh neighbourhood. However, since 2012 there have been several waves of displacement among the town’s Bedouin residents. Today only one Bedouin family remains.

In 2012, young Bedouin men from Qarayya joined armed opposition factions in the neighbouring Daraa governorate, and the regime security apparatus began pursuing their families. As a result, some of them fled to Daraa. Then in 2018, with the reconciliation agreement in Daraa underway between the regime and rebels, most displaced families from Qarayya returned home and life returned to a sense of normalcy. At the time, only a few Bedouin youth from the town remained within the opposition militias, stationed near the city of Bosra Al-Sham. They became affiliated with the Eighth Brigade of the Fifth Corps, which was backed by Russia and controlled the city.

A battle broke out in Qarayya on March 27, 2020 between the Eighth Brigade, led by Ahmad Al-Odeh, and local Druze factions, against a backdrop of repeated kidnappings in the area between Bosra Al-Sham and Qarayya. Armed Bedouin men within the Eighth Brigade participated in the fighting against their Druze neighbours. Dozens of Druze died in the fighting because of a military imbalance between the two parties. Fearing reprisals from family members of the slain Druze fighters, Bedouin residents fled to the countryside west of Qarayya, on the outskirts of Bosra Al-Sham, and remained there for several days. Some of them later fled to the Daraa governorate while others preferred to set up tents and remain in the countryside west of Qarayya. However, the largest group ended up in the town of Kharba, located in the southwestern part of the Suweida governorate and controlled by Eighth Brigade-affiliated militias.

Kharba, which belongs administratively to Suweida, was majority Christian before opposition militias from Daraa seized it in 2014. Christian residents subsequently fled the town, which remained virtually empty under opposition control. The Eighth Brigade then held control of Kharba from 2018 to 2020. Displaced Bedouin from Qarayya stayed in Kharba for only a short time before they left under a settlement between the residents of Kharba and the Eighth Brigade on May 2, 2020. The original residents of Kharba were then allowed to return. The displaced Bedouin then moved from Kharba to a camp near Khirbat Al-Kawwam within the Qarayya administrative area.

About 200 displaced Bedouin residents of Qarayya settled in the camp, which soon came to include displaced Bedouins from other areas, including Suweida’s eastern Badia. Some displaced Bedouin in the camp were recruited to join armed groups, including those that work for the regime’s Fourth Division. Those groups initiated armed clashes with local Qarayya militias, carried out kidnappings and killings against local farmers working their fields west of the town. The skirmishes  between those armed groups and Qarayya residents are ongoing and include crop burning, shootings, murder, and kidnapping.

Local leaders from Suweida and Daraa have tried to find solutions for the disputes. The Russian Reconciliation Centre in southern Syria has also intervened, sending a delegation to visit the two sides. Representatives of the townspeople of Qarayya and displaced Bedouin reached a preliminary agreement for the Bedouin to return to their homes in Qarayya, except for two families whose sons were involved in battles in which a number of residents were killed. For unknown reasons, the Russian mediators rejected that condition, insisting instead that the Bedouin residents be allowed to return home with no conditions. Qarayya notables subsequently refused to attend the reconciliation meeting that was scheduled to be held at the Russian Reconciliation Centre in Damascus in April 2021. 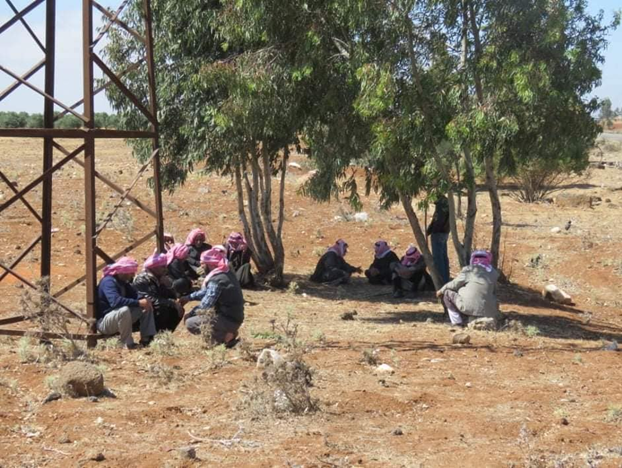