Syrian official media outlets reported in recent days that residents had “returned” to the majority-Turkmen town of Qastal Maaf in the countryside of Lattakia governorate. Despite the accompanying celebration attended by the governor of Lattakia and local Baath Party leaders, those who reportedly returned may not in fact be the town’s original residents.

Qastal Maaf is the centre of a majority-Turkmen district of Lattakia. Its inhabitants have largely opposed the regime since 2011. By 2012, a large number of Turkmen joined rebel factions, while some formed Turkmen militias to defend their areas. The National Defence Forces, a pro-regime militia, carried out escalating attacks against Qastal Maaf from 2012-2013, forcing most residents to flee to nearby Turkey, where they have ethnic and familial ties. However, some residents chose to flee to Lattakia city, where they own properties in the majority-Turkmen Ali Jamal neighbourhood.

The opposition controlled Lattakia’s northern countryside from 2013 until 2018, when regime forces and Iran-backed militias  managed to regain control of the Qastal Maaf district with Russian air support. It wasn’t until 2020, however, that the regime allowed displaced residents to visit the town to check on their homes and farms, which have faced widespread destruction.

Speaking to a correspondent for The Syria Report in Lattakia, human rights sources said that Syria’s Turkmen have been the target of discriminatory policies since 2011, due to their ethnicity. Most of them trace their roots to Ottoman-era Turkey. Those same human rights sources added that the regime had arrested many Turkmen on the pretext of their ties to the opposition, or for communicating with Turkey. This discriminatory treatment remains in place in regime-held areas.

According to local Turkman sources from Qastal Maaf, “returnees” who appeared recently in pro-government news videos were not actually from the town. The Syria Report was unable to confirm the identities of those in the videos. However, local sources from across the border in Turkey indicated that most of the people in the videos were residents of small Alawite villages adjacent to Qastal Maaf, who returned to their homes two years ago.

Aid organisations active in Lattakia’s northern countryside have provided support to residents of those Alawite villages, including Basqin, Beit Fares, Al-Maidan and Al-Ramadiyeh. A source from one of those organisations told The Syria Report that no more than 20 families from Qastal Maaf had returned and received aid, most of them elderly. 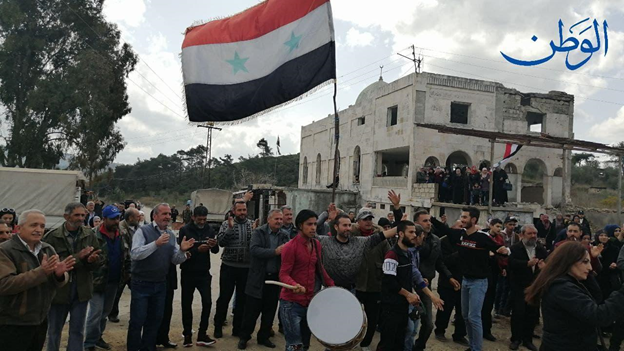