Displaced Bedouin residents from the town of Thibin in the southwestern part of the Suweida governorate reached an agreement with other town residents this month allowing them to return home after five years of displacement. Those planning on making the return began repairing and re-equipping their homes in recent days, with the aim of settling permanently in the town.

Around 300 people from the Al-Shanableh Bedouin clan used to live in the so-called Bedouin neighbourhood in the southern part of Thibin, where they owned houses and lands. But in July 2017, four Druze women from Thibin were killed by unknown gunmen on the town’s main road, which had been the site of frequent kidnappings. Relatives of the four women accused Bedouin clan members of having participated in the killings. Bedouin families subsequently fled Thibin to the neighbouring Daraa governorate, fearing potential reprisals. On the day of the women’s funeral, armed Druze residents attacked the Bedouin neighbourhood, burning down 17 empty homes belonging to displaced families.

Afterwards, the Thibin bedouins settled near the city of Busra Al-Sham in the eastern part of the Daraa governorate. Then in early 2022, the displaced families asked Druze notables, including religious ones, to mediate with the Druze residents of Thibin to allow them to return home. Representatives of the two sides met with the Druze mediators in March 2022 in the city of Salkhad south of Suweida. Family members of the slain women agreed to permit the Bedouin families to return. The meeting resulted in what became known as a “return agreement” that included a settlement on the methods and conditions for return.

Then in April, representatives of the victims’ families and of the Bedouin residents met with one another in the presence of the head of the security and military committee for Syria’s southern region, which includes the Suweida, Daraa, Quneitra, and parts of Rural Damascus governorates – each region of regime-controlled Syria has a so-called security and military committee, which comprises officials from the main security services, and which oversees overall security in the region. The two sides agreed on the terms of the return agreement and signed it. The head of the security and military committee also signed the agreement and requested that the governor of Suweida secure the public services needed for residents to return home. He also ordered the heads of the relevant security apparatus to “take the necessary measures” to carry out the agreement.

The agreement includes provisions allowing the return of the Al-Shanableh clan to Thibin, except for two families who are accused of being involved in the murder of the four Druze women. The agreement stipulated that those two families, as well as the individuals accused of the crime, could return to Thibin only after proving their innocence before the court. Until then, returnees are prohibited from harbouring the accused individuals in their homes.  The returnees must also forfeit their rights to sue for any damages to their homes and properties.

A copy of the return agreement 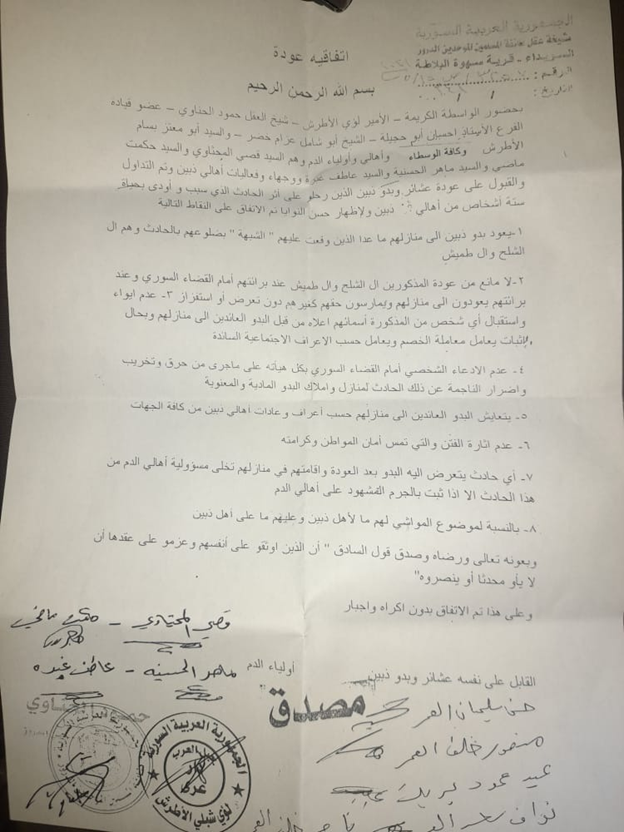 Source: A local correspondent for The Syria Report