The National Defence Forces, a paramilitary group loyal to the regime, has authorised the transformation of their former military headquarters into a church, which was built on extorted land in rural Hama.

The property, No. 98, is located on Tallet Al-Khoder near the Orontes River, north of the predominantly Christian city of Mhardeh, in the rural part of Hama governorate. The land is divided into two sections: one section that is barren and uncultivated, and the other that is cultivated with rain-fed seasonal crops.

Though originally owned by the well-known Al-Baroudi family of Hama city, Property No. 98 was distributed to local farmers under Agrarian Reform Law No. 161 of 1958. Therefore, the land is a common property jointly owned by majority-Sunni townspeople of the neighbouring towns of Abu Obeideh Bin Al-Jarrah and Al-Zulaqiyat.

When battles intensified between opposition and regime forces in the area in 2013, the pro-regime National Defence Forces (NDF) in Mhardeh seized the whole property.

The property sits strategically on high ground, which allowed troops to scout out opposition forces in the nearby towns of Halfaya and Al-Latamneh in rural Hama. In mid-2013, the NDF set up a military headquarters on the property, just 100 metres from the religious shrine.

Since then, NDF fighters have barred landowners from entering the area, on the pretext that it is now a military zone. According to a correspondent for The Syria Report in the area, landowners are still unable to enter Property No. 98 and cultivate their land. Some of these property owners are now living in regime-held areas of Hama governorate, while others have been forcibly displaced to opposition territory since 2018.

Simon Al-Wakil is the NDF commander in Mhardeh and currently the most powerful man in the city. He enjoys good relations with Russian forces stationed at the nearby Hmeimim military base and presents himself as the protector of the Christian population in the area.

In early 2021, Al-Wakil gave the NDF’s military headquarters on Property No. 98 to the Mhardeh ecclesiastical authorities to build a small church next to the shrine called the Church of the Holy Martyrs. The church was reportedly meant to commemorate the martyrs from Mhardeh who recently died during the war. A Russian military delegation from the Hmeimim base visited the site meant for the church in early 2021.

Construction of the church took four months, with the NDF providing machinery. Some 5,233 stones were taken from the historic part of Mhardeh to build the church, while 4,000 trees were planted in the garden surrounding the building.

The church was consecrated in June 2021, with the Greek Orthodox Metropolitan of Homs and the Greek Orthodox Metropolitan of Baghdad and Kuwait and their dependencies. There was no official Syrian presence at the opening ceremony. Since then, the church has held religious rites and received visits from Syrian Christian clergy. Notably, the NDF still organises military and security meetings in the church, according to the correspondent.

The Sacred Martyrs Church and the nearby shrine 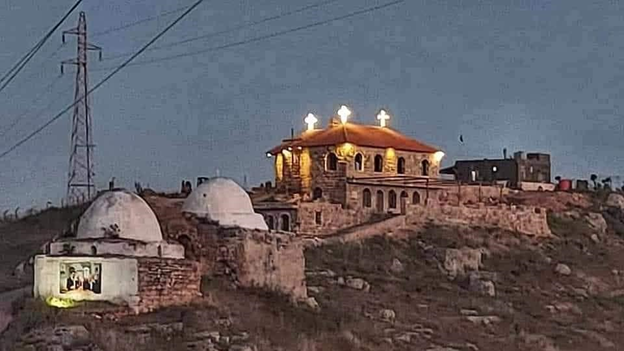