Recent years have seen authorities from the Kurdish-majority Autonomous Administration in North and East Syria (AANES) seize real estate properties owned by people who were displaced from areas under their control in Aleppo. Though some of those displaced people have recently returned to the area, AANES municipal authorities are slow to return the seized properties.

The Kurdish-majority People’s Protection Units (YPG), which is the main component of the Syrian Democratic Forces (SDF), has controlled the Al-Sheikh Maqsoud and Al-Ashrafieh neighbourhoods in the northern part of Aleppo city since 2013. Both neighbourhoods are inhabited mostly by Syrian Kurds. In 2014, the AANES established special municipal authorities called the “People’s Municipality” in these two neighbourhoods with agreement from the government in Damascus. The YPG later supported regime forces in their fight against opposition factions in east Aleppo in late 2016.

The AANES still controls the Al-Sheikh Maqsoud and Al-Ashrafieh neighbourhoods. However, clashes break out intermittently between the YPG and regime forces, the latter of which sometimes imposes blockages on the AANES-held area.

In recent years, the AANES municipal authorities have seized hundreds of real estate properties from displaced people who are originally from Al-Sheikh Maqsoud and Al-Ashrafieh, according to the correspondent for The Syria Report. Those were displaced largely due to the deteriorating security situation after 2013. Many of the displaced owners of these seized properties still remain in displacement, in regime-held areas of Aleppo city, opposition-held areas of northwestern Syria, or outside the country altogether.

The People’s Municipality distributed these seized properties to families of female and male YPG fighters, as well as employees of AANES institutions. In addition, a number of the properties were distributed to displaced Kurdish families from Afrin, an area in the rural western part of Aleppo governorate that was seized by Turkish-backed rebel forces in early 2018. According to the local correspondent, the People’s Municipality also seized shops belonging to displaced people. These properties were usually then distributed free of charge under contracts called “temporary housing contracts”, issued by the People’s Municipality. It remains unclear what conditions beneficiaries must meet in order to obtain such properties through the temporary housing contracts, or how to terminate the contracts and evict occupants.

Since the battle for Aleppo ended in 2016 and a relative stability took hold, some displaced people from Al-Sheikh Maqsoud and Al-Ashrafieh began to return home, only to find their houses occupied and their shops run by the People’s Municipality.

Facing pressure from real estate owners, People’s Municipality authorities pledged in mid-2021 to vacate the homes that had been occupied through the temporary housing contracts–however, eviction would only occur upon the return of the property owner themself or of one of their first-degree relatives that includes father, mother, wife and children. Those same authorities later retracted their pledge, issuing Decree No. 175 in November 2021 to halt the evictions “for humanitarian considerations, at the onset of winter”. The decree put the evictions on hold until the beginning of April 2022. 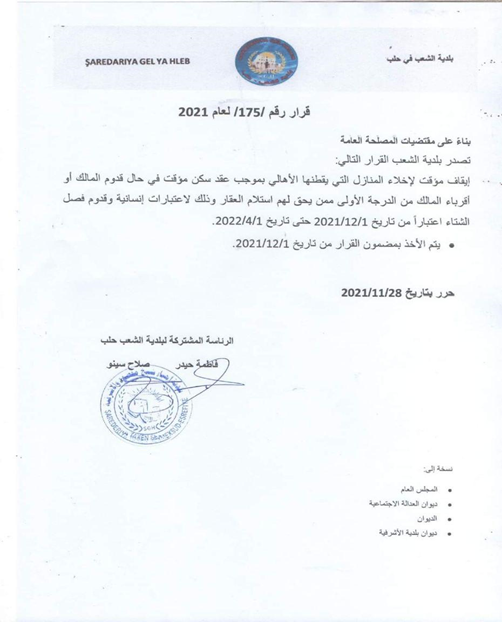