At the end of January 2021, the Syrian president issued Law No. 1 of 2021, granting the General Housing Establishment (GHE) an annual loan not exceeding SYP 5 billion to help fund the construction of so-called “labour housing.”

The general manager of the GHE said that the law would bring much needed funds for its projects to build housing for Syrian workers amid rising costs.

Labour housing in Syria is housing built by state-owned entities and dedicated to low-income workers.

In effect, Law No. 1 of 2021 amends Article 8 of Decree No. 46 of 2002 related to the ownership of labour housing. The law does not stipulate an annual appropriation within the investment budget, but rather enables the GHE to borrow up to SYP 5 billion, subject to the approval of the Minister of Finance.

Part of the problem is that, initially, labour housing projects were implemented and owned by the state, and then rented out to public sector workers, while at a later stage workers were allowed to own these homes.

In 1980, the government formed the Labour Housing Committee (LHC) with the aim of building and leasing housing units to public sector workers. Law No. 43 of 1982 then regulated the leasing mechanism and controls for such housing. Government circularNo. 1117 of 1988 defined labour housing as buildings constructed by the LHC and registered in the Land Registry as property belonging to the government.

Workers were later granted the possibility of owning these homes. Decree No. 46 of 2002 amended Law No. 43 of 1982, allowing occupants to own the housing under certain conditions. The 2002 decree was applied to housing projects that had been implemented up to that date.

The Syria Reportwas unable to confirm the implementation of labour housing projects between 2002 and 2008. Then in 2008, Government Resolution No. 920 specified the mechanisms and conditions for registering to purchase labour housing built from then onwards. Because of high demand for these relatively cheap homes, would-be buyers—known as subscribers—are given priority based on several criteria including employment type, seniority, and number of family members. Heirs can also own the apartment in the event of the worker’s death.

One key difference between cooperative housing projects and labour housing lies in their funding. In cooperative housing, the funding for the projects comes only through the payments made by subscribers. However, labour housing is funded through three channels. First, eligible workers subscribe by making down payments and paying subsequent monthly instalments. Second, the Public Debt Fund funds the GHE in the form of an interest-free loan. Finally, there is self-funding from the GHE itself and from the loans it obtains in order to construct the housing project.

The largest labour housing project to date followed a 2009 decree issued by the Ministry of Public Works and Housing to determine the mechanisms for public entities to construct 21,760 labour housing units, provided that they be completed within a period of seven years. Subscription for this housing project began in June 2010, with future homeowners having to make a down payment of SYP 75,000 and monthly instalments of SYP 3,000. Subscribers were meant to receive their housing within seven years, provided that the payments reached 10 percent of the home’s cost by then, with the rest to be paid in further instalments for up to 25 years at an annual interest rate of five percent.

Although 11 years have passed since the subscription period, the construction sites have not yet been determined for many of these projects, and many subscribers have withdrawn. Others have stopped making their monthly payments. Construction has slowed on yet more housing within the project, amid issues related to land expropriation, a lack of funding and corruption. Recently, the GHE has pledged multiple times to hand over all the labour housing units it committed to by the end of 2024. 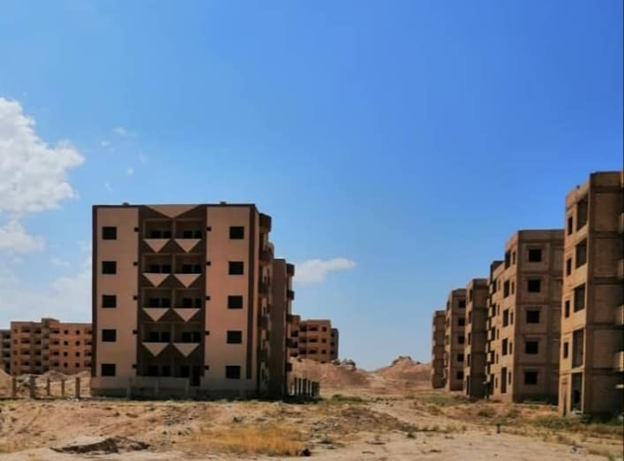