Since January 2021, the municipality of Al-Zerbeh, a town located south of Aleppo city, has demolished dozens of properties belonging to allegedly pro-opposition residents displaced from the town as well as to opposition sympathisers who had been displaced from nearby villages. Municipal officials say the buildings were in violation of the construction code. The demolitions also targeted properties in neighbouring villages, as well as areas surrounding the nearby strategic M5 Highway that connects Aleppo and Damascus and passes near Al-Zerbeh.

In official statements published by pro-regime media, the mayor of Al-Zerbeh said that some of the demolished buildings had been constructed on publicly owned property, and others on properties not belonging to the builders themselves. The buildings were removed, he added, under Decree No. 40 of 2012, as well as under instructions from the governor of Aleppo.

Al-Zerbeh’s demolition campaign began after an official government delegation, headed by Minister of Public Works and Housing Souheil AbdulLatif, visited the town in late 2020. AbdulLatif’s delegation was accompanied by Failaq Al-Mudafaeen Aleppo, the pro-Iran militia currently in charge of Al-Zerbeh.

The owners of most of the demolished properties built them on their own land, albeit without permission, during the several years the town spent under the control of opposition forces, according to a correspondent for The Syria Report in Aleppo. A smaller number of the properties had been built adjacent to the M5 highway, and others built before opposition forces seized the area in 2013. The property owners were later forcibly displaced to opposition-controlled areas of the neighbouring Idlib governorate and the rural western part of Aleppo governorate.

A former official in Al-Zerbeh’s opposition-run local council told The Syria Report that the body was unable to issue building permits during its control over the town, due to logistical problems. Large waves of displacement to the town up to 2016 meant there was an urgent need for new housing. Many buildings were constructed during this time to accommodate the influx of displaced people from 2013 to 2016.

Regime forces, supported by pro-Iran militias and Russian warplanes, recaptured Al-Zerbeh and the remaining stretches of the M5 in 2020. No more than 10 percent of Al-Zerbeh residents have returned to the town since regime forces recaptured it, according to a local human rights source. Most of the returnees are people who had previously sought refuge in regime-held territory, or have relatives fighting in pro-Iran militias.

A building demolition in Al-Zerbeh 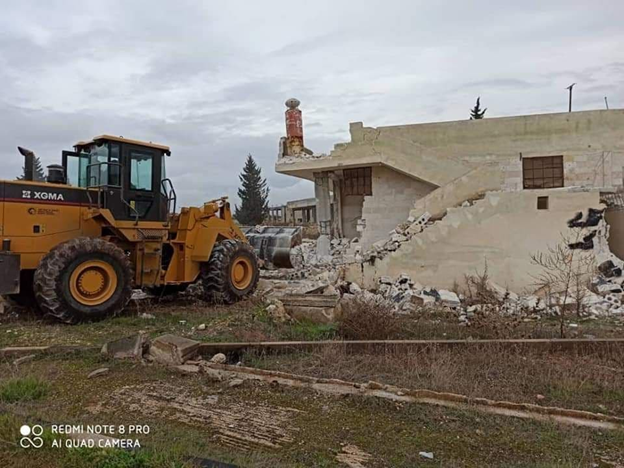 HelpAbout usContact usAdvertise with The Syria ReportTerms & conditions
Copyright © 2022 The Syria Report – all rights reserved. Your use of this website is subject to our legal terms & conditions
Amendment to Military Service Law Raises Serious Concerns Over Syrians’ Real... Iran to Build Pilgrimage Hotels on Absentee Property in Deir-ez-Zor
Scroll to top