Over the course of 2020, three rounds of public auctions were held to invest in lands belonging to people displaced from formerly opposition-held territory in rural Hama, Idlib and Aleppo governorates. The first was to invest in the pistachio crop, the second for olive picking and the third for cultivating wheat. These auctions were organised by the security and military committees in these governorates, through the government-affiliated Farmer Leagues.

Between August 2019 and March 2020, regime forces captured around 230,000 hectares of farmland in rural Hama and Idlib, as well as 350 hectares in rural Aleppo. Many owners of these lands fled the regime’s military advances, heading to opposition-held territory in northern Aleppo and Idlib governorates.

Since the end of 2019, the heads of security committees issued instructions to tally the agricultural lands whose owners live in so-called “terrorist areas” outside Syrian government-controlled territory. And since mid-2020, public auctions have been held to invest in some of those lands. The properties included farmland in 38 villages and towns across rural Hama governorate, 70 villages in Idlib and 11 villages in Aleppo. The auctions were held at cultural centres and the headquarters of the various Farmer Leagues, with the winners usually obligated to invest in or cultivate a certain crop for one season.

Some of the auctions for investing in wheat cultivation, held in November 2020, were announced as part of a drive to collect debt owed to the Agricultural Cooperative Bank by the original owners of the land, albeit without any specific information on the number of debtors or the sizes of their debts. Proceeds from the auctions held between June and July 2020 for the pistachio harvest were given to the Fund for Supporting Martyrs. The fund is affiliated with the local branch of the Office for the Central Commission to Support and Monitor the Situations of Martyrs’ Families in Hama governorate, which itself is affiliated with the Hama branch of the Baath Party.

Collecting funds, searching for new sources of funding or imposing wheat cultivation as part of a larger government strategy to face Syria’s bread crisis could all be logical reasons behind the recent spate of public auctions of farmland. However, these auctions have raised fears among displaced people that their properties could soon be confiscated. Pro-opposition news sites have reported that the regime has indeed started confiscating additional farmland under the pretext that their owners are “terrorists”, in line with Anti-Terrorism Law No. 19 of 2012. The Syria Report was unable to independently verify these reports. No court ruling has yet been issued in this regard by the Terrorism Court, nor has there been a ruling to sell the properties of those convicted under the provisions of the Syrian Civil Procedure Law No. 1 of 2016.

Likely the largest danger from these public auctions of displaced Syrians’ lands is the violation of the owner’s rights to use, exploit and dispose of their property—rights guaranteed by the constitution and legislation on ownership. Article 768 of the Syrian Civil Code stipulates that “the owner of the thing itself, within the limits of the law, has the right to use it, exploit it and dispose of it,” while Article 770 says the owner has “the right to all of its benefits, products and attachments, unless there is a text or agreement to the contrary”.

If an owner violates their rights to use, exploit and dispose of their property, they may lose their right of ownership in one of two ways: First, ownership may be forfeited in cases where agricultural lands distributed by the Agrarian Reform Law are not used. Second, an owner’s right to dispose of properties given under land grants may also be forfeited after failure to plough the land for a period of five consecutive years, according to the Civil Code.

That said, the main driver behind the government’s push to invest in displaced people’s farmlands could be a desire to transfer possession of those lands to their current investors. Possession of a piece of land requires that the holder get ahold of the property and carry out material work on it, such as farming, if it is agricultural land. The holder must also have the intention to use the property and appear as its owner. However, in the case of the auctioned farmlands in Hama, Idlib and Aleppo, these steps may face a legal dilemma in that the current investor in the land is considered a usurper because the property seizure took place without any legal document for possession. The seizure also occurred under duress, as the owner was not present, having been forced to flee their land. 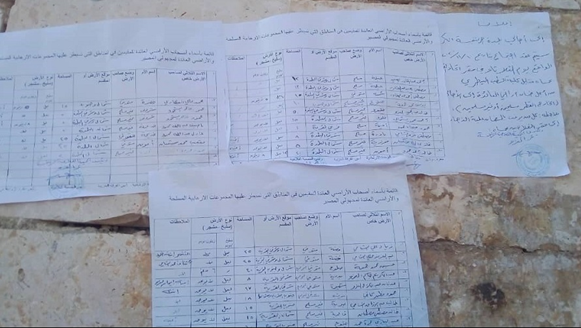