The population of Al-Shaab, a village in the eastern part of the Suweida governorate, has more than halved in recent years from its 2004 census count of 5,000 residents to under 2,000, according to local estimates. The village has seen multiple waves of migration over the course of the war, with residents scattering to other towns in eastern Suweida.

Al-Shaab was founded in the 1960s on state-owned land. Administratively, it is part of the neighbouring town of Qaisma, itself part of the Malah district, which lies within the Salkhad region. Official zoning plans were issued for Al-Shaab in 2006 but were quickly put on hold because the village’s 195 hectares of land are still registered within state property.

The mayor of Qaisma told pro-government newspaper Tishreen in September 2020 that plans were ready to transfer ownership of the land from the state to the town’s municipality. He added that there were no obstacles blocking such a transfer, provided that the municipality then sells the land to beneficiaries who had built their properties over it or leases it under contracts.

Al-Shaab is home to both Druze and Bedouins, who fear that delaying transfer of the land to municipal ownership could mean that they may lose their rights to dispose of homes and other properties they own. Legally, those properties are still considered to be built on state-owned land.

The village, which sits along the edges of the Hammad desert area, has faced a number of attacks in recent years by the Islamic State (ISIS), most recently in November 2018. Residents were able to repel the attack after heavy clashes. Earlier, in 2017, ISIS attacked Al-Shaab, executing a number of unarmed residents.

However, ISIS attacks and the delayed zoning plan are not the only factors pushing residents to leave Al-Shaab, according to a correspondent forThe Syria Report in Suweida. Although it is located on the edge of a desert area, the village does not have a single well, and there is no network for distributing drinking water. There is no distribution point for livestock feed, despite there being 50,000 head of cattle in the village. The nearest feed centre is located 40 kilometres away from Al-Shaab, while the closest water well is in the village of Khazmeh. Al-Shaab residents must transport that water to their own village using water tankers.

The village has just one primary school, but teaching staff are from elsewhere, in southern Suweida. Teachers are rarely able to abide by official working hours, as no transportation is provided to them. There are no medical services or doctors in the village, meaning residents must travel to Malah for even the most basic medical care. 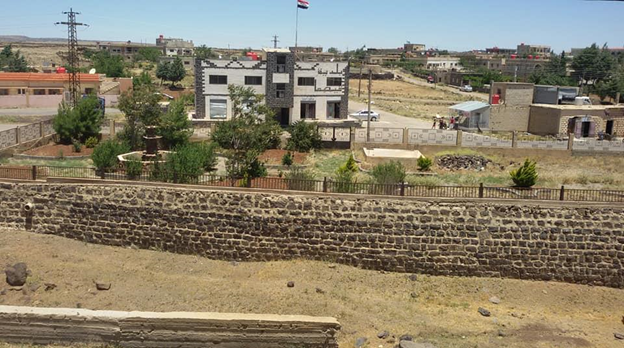