Displaced people from Hujeira, a town south of Damascus, are required to obtain prior security approval from the General Intelligence Directorate before returning to their homes, years after most of them fled battles in the area.

Those hoping to return must present documents proving property ownership in Hujeira, and pay outstanding electricity and water bills owed during the years they were living outside the town. Whoever does not abide by these conditions is subject to arrest. At the same time, an easier return process was granted to some families whose sons had performed mandatory military service or volunteered to join pro-regime militias. Less than half of Hujeira’s residents have been able to return home, residents told a correspondent for The Syria Report in the area.

Hujeira falls within the Babila district, which itself is inside Damascus Countryside governorate. The town is divided into Hujeira Al-Balad, where around 5,000 residents lived before 2011, and Hujeira Naziheen — “naziheen” means  “displaced people” in Arabic.Most residents of this sector were originally displaced in 1967 from the occupied Golan Heights. Hujeira Naziheen has its own independent municipality and falls under the administration of Quneitra governorate, which borders the Golan Heights. It was home to some 150,000 people before 2011. Historically reliant on agriculture, the town is surrounded by an estimated 120 hectares of farmland planted with wheat and barley, as well as vegetables and legumes. The area also contains cattle farms.

Regime forces attacked the area in mid-2012 to quell popular protests and looted local homes and farms, including livestock. By the end of 2012, rebels were able to regain control of Hujeira, but a large number of residents had already fled the fighting.

In November 2013, Shia militias stationed in neighbouring Sayyida Zeinab launched an attack on Hujeireh with the help of Liwa Al-Quds and the Popular Front for the Liberation of Palestine (PFLP), eventually capturing the town after the last remaining residents fled. Hujeireh faced widespread destruction as militias burnt or seized the properties of pro-opposition residents. Since then, the headquarters of the various Shia militias in Hujeira have been the target of Israeli airstrikes. The most recent to hit the town was in April 2020.

These militias later helped Shia families who had been forcibly displaced from the two rural Idlib towns of Kafraya and Fuaa settle in Hujeireh, alongside a few thousand displaced Shia Muslims from the city of Busra Al-Sham in Daraa province.

Hujeireh still suffers from neglect and lacks basic services. Its bakery is out of service, and the secondary school has not yet been repaired. The cell phone towers are still destroyed and electricity is off for long periods due to rationing. Most of the services that are provided in the town depend on the Jihad Al-Bina Development Association, which is linked to the Lebanese Hezbollah and subject to Western sanctions. 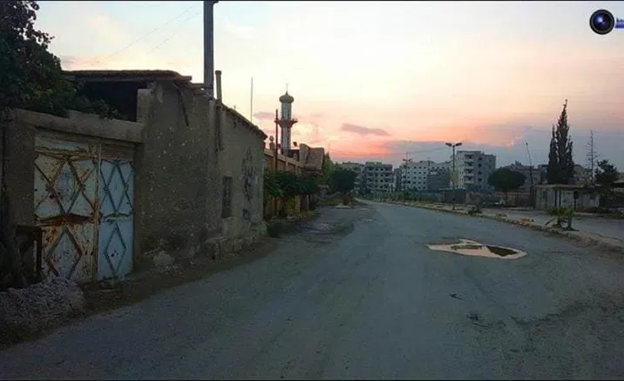