Hardline Islamist group Hayat Tahrir Al-Sham (HTS) has begun evacuating the homes of “jihadist emigrants” in areas of Idlib city under the group’s control. This move is seen as part of a broader security campaign against displaced jihadists who are not among the HTS’ ranks, as well as a violation of housing, land, and property rights.

Jihadist emigrants, or “al-jihadioon al-muhajiroon” as they refer to themselves, are Muslims who emigrated to Syria during the war to support the Islamist cause. Many of these emigrants include the children and wives of fighters. Some of these people settled down in areas under the control of HTS in Idlib, though they never belonged to the jihadist group and are often described as “independent.” Many of them have since given up their arms and found work in other fields. There are no precise statistics available, but the number of these independent jihadist emigrants are estimated to be in the thousands.

HTS sent eviction notices to a large number of these emigrants in early February, giving them various deadlines to leave their residences in Idlib city ranging from several days to several weeks. The hardline group also ordered some of them to leave the city permanently. Some were also arrested, while others were barred from moving to rural areas in the neighbouring Aleppo governorate that are under the control of other opposition groups. HTS prohibited some real estate owners from renewing their lease contracts with the emigrants.

The jihadist group informed a number of the wives of emigrants it had detained that they must leave their homes as well, giving them until the end of February to find homes outside Idlib city. The eviction notices given to these women threatened to keep their husbands in detention for long periods of time if they failed to leave their homes.

According to a correspondent for The Syria Report in the area, many of the properties that underwent HTS evictions are classified as “ghana’im,” or spoils of war, that emigrant families had taken for themselves after Islamist rebels captured Idlib in 2015. Some emigrants lived in the seized homes as renters with official lease contracts, paying symbolic monthly rents collected by the HTS-affiliated Syrian Salvation Government (SSG).

All the seized “ghana’im” properties belong to regime loyalists, Christians, or opponents of HTS, most of whom fled Idlib in 2015 and left their properties vacant. The fate of these properties after the HTS evictions is unclear, including whether the group plans to occupy the houses.

HTS’ media office said in a statement that the evictions were not targeting any specific group or nationality, and that the notices had been issued months ago. Many of the houses slated for eviction were “public property,” the statement said, while others were private real estate whose owners were claiming their rights in cases currently being considered by the judiciary. However, HTS did not further clarify the meaning of “public property” – whether that meant properties that were owned by the Syrian state or private real estate it had seized.

HTS is determined to evict the “emigrant” residents and refuses to let them stay in the city, the correspondent said. According to some rumours, the evictions come as a civilian protection measure, especially in the city’s densely populated centre, as air strikes target some “emigrants” wanted on international terrorism charges.

Clarification about the evacuation decision 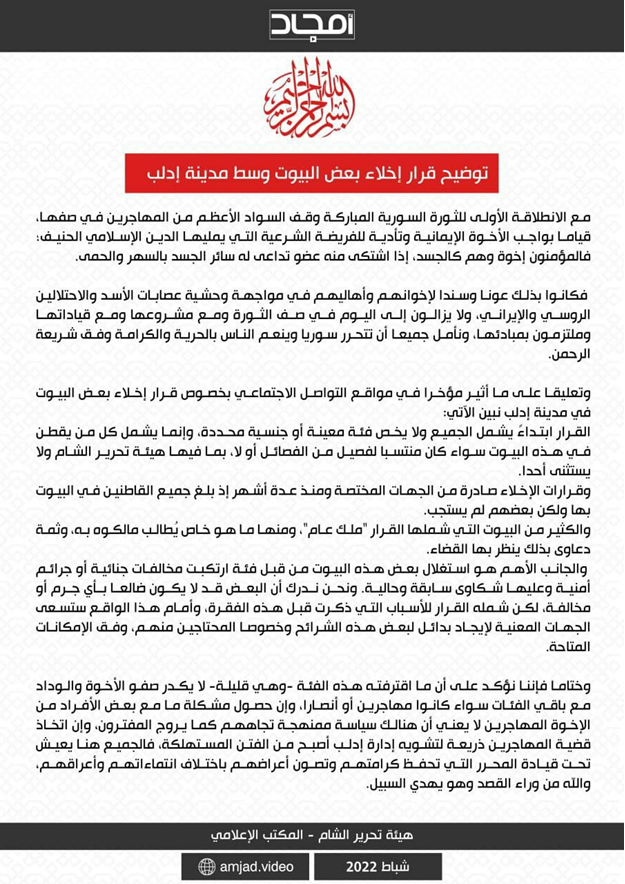