In November 2021, the Tammuz Construction Company obtained a licence to build two tower blocks in the city of Ayn Tarma, which is located in the Douma district of East Ghouta.

According to a local correspondent for The Syria Report, Tammuz is owned by real estate contractor Maamoun Zeydan, who had a real estate office in Ayn Tarma before 2011. After the uprising began in 2011, Zeidan left Ayn Tarma, which rose up against the regime during the uprising. He only returned after regime forces recaptured the city in 2018.

The company began removing rubble from the streets and filling tunnels in Ayn Tarma and working to restore the foundations of some local buildings in early 2021. This restoration work was carried out only after a clearance from the security services was obtained, our correspondent said. It is unclear whether this work had been approved by the owners of those buildings, as many former Ayn Tarma residents were forcibly displaced from the area.

It is also unclear who owns real estate property number 1077, where Tammuz obtained the licence to build its two towers. The property appears to overlook the Southern Ring Highway from the east, as per a promotional video the company posted on its Facebook page. The Southern Ring was built in the 1980s and 1990s to surround Damascus on its southern and eastern city limits. In doing so, the highway cut through Ayn Tarma’s agricultural land, dividing it into two parts: the east, which was the larger section and remains under the administrative authority of the Ayn Tarma municipality in the Rural Damascus governorate, and the west, which was annexed by the Damascus governorate. This division of Ayn Tarma’s agricultural land came alongside large expropriations of land from the city. In 2010, the Damascus governorate issued a zoning plan for the Ayn Tarma land located west of the Southern Ring, dubbed the “Eastern Gate Plan.” The plan included commercial and residential towers, but was never implemented due to the uprising in 2011.

Ayn Tarma is among the closest East Ghouta cities to Damascus proper and was once home to 40,000 people, according to statistics from 2009. Ayn Tarma also contains large neighbourhoods of informal housing, the most notable of which are Al-Zainiyeh, Al-Tabbaleh, and Wadi Ayn Tarma. These neighbourhoods saw rapid urban expansion in the years leading up to 2011 due to cheap real estate and rental prices and their proximity to the capital. On the other hand, Ayn Tarma is also home to a formally zoned commercial and residential area that includes the neighbourhoods of Al-Kheir Souqs, Al-Shimiland, and Kaziyeh Sunbul. These neighbourhoods witnessed rising demand for real estate before 2011, particularly by members of the Damascene middle class who were looking to buy property.

Syria’s armed opposition took control of Ayn Tarma in 2013. Regime forces launched a military campaign in 2017 to cut Ayn Tarma off from the neighbouring Damascus district of Jobar. The fighting lasted for eight months, during which the regime bombarded Ayn Tarma with so-called “elephant” missiles and airstrikes, causing widespread destruction. The intensity of the bombing pushed the Ayn Tarma local council to dig underground tunnels that link the main service sites in the city with one another. Local military factions also dug supply and evacuation tunnels reaching the front lines. Consequently, these tunnels impacted the structural safety of the buildings above them, particularly in the informal housing neighbourhoods.

Only around 8,000 people currently live in Ayn Tarma amidst the widespread destruction of buildings and infrastructure, as well as remaining rubble. Residents had begun to gradually leave Ayn Tarma in 2013. Later, in 2018, the regime forcibly displaced around 1,000 remaining residents to opposition-held northern Syria. 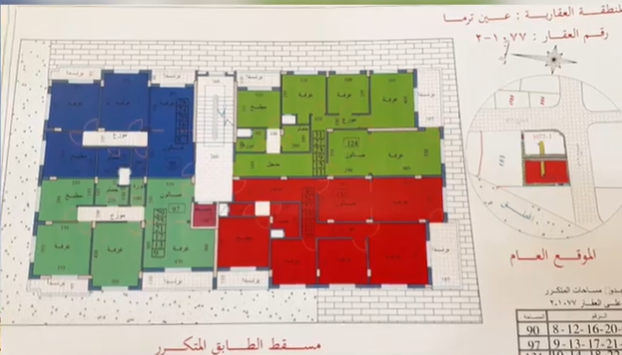