The Syrian Ministry of Defence has laid claim to 12.5 hectares of land in the Moadamiyeh suburb of Damascus for the purpose of constructing residential buildings and a sports facility, a former official from the town’s municipality told The Syria Report.

The area is part of a 40-hectare real estate holding registered in the real estate registry under number 2424. It had been originally expropriated in 1985 by the Damascus governorate.

In 1987, the municipality of Moadamiyeh managed to recover 12.5 hectares of land not previously marked in the expropriation. This is the land that the Ministry of Defence has now decided to claim without consulting the municipality, which is the party administratively responsible for the land.

Syria’s land ownership system follows a myriad of rules and legal statuses, some of which go back to the Ottoman period.

The land is located north of the Damascus-Quneitra highway after the police housing complexes towards the town of Jdeidet Artouz, near the mountains known among the population as the “Fourth Division mountains” because of a base run by that division, which is led by Maher Al-Assad, the brother of current president Bashar Al-Assad.

The expropriation decision was not brought up to the expropriations committee in the Moadamiyeh municipality, and the Damascus governorate refused to meet with a delegation of residents impacted by the move, local sources told The Syria Report. Also, the expropriation apparently did not respect legal obligations, which require that the acquiring party obtains permission from the party administratively responsible for the property. Meanwhile, no decree has yet been issued to expropriate the property and justify its public benefit status.

This new acquisition comes despite promises made in 2019 to the town’s residents by the president of the National Security Bureau, a body that coordinates the work of Syria’s intelligence agencies, to help solve outstanding expropriation issues, which have eaten into large chunks of the town and its agricultural land.

Moadamiyeh has a long history of expropriations, which has helped push residents to participate in anti-regime protests since 2011. In mid-2011, a few months after the beginning of the popular uprising, the then-head of the Airforce Intelligence Directorate, one of the main branches of the country’s security apparatus, approached a delegation of residents, offering to lift expropriations from some areas of the city to calm anti-regime protests. However, protests continued, and the town was eventually subjected to a siege from 2013 to 2016, ending in a reconciliation agreement in August 2016.

Land started to be marked for expropriation in Moadamiyeh in the 1950s, with a series of decrees, some of which were for the benefit of the Ministry of Defence. In the following decades, an increasing portion of the town’s land was transferred to state entities, particularly from the 1970s onward, when the expropriation served to establish a military-security belt west of Damascus.

Among those that benefited from that transfer of ownership were the now-defunct Defence Companies led by Rifaat Al-Assad, brother of former president Hafez al-Assad – the land they acquired was later transferred to the Fourth Division – as well as the elite Republican Guard force and the police department, which built housing complexes on the northeastern border of the town.

A portion of the Mazzeh military airport, as well as the Airforce Intelligence headquarters were also established there, on real estate properties no. 3428-3428 on the southeastern borders of Moadamiyeh.

Some 35 years after real estate property no. 2424 was expropriated, compensation has yet to be paid to residents despite the fact that the now repealed Expropriation Law No. 60 of 1979 stipulated that the payment for land expropriated had to be made within five years from the date of the property seizure.

Image of Moadamiyeh and its surroundings 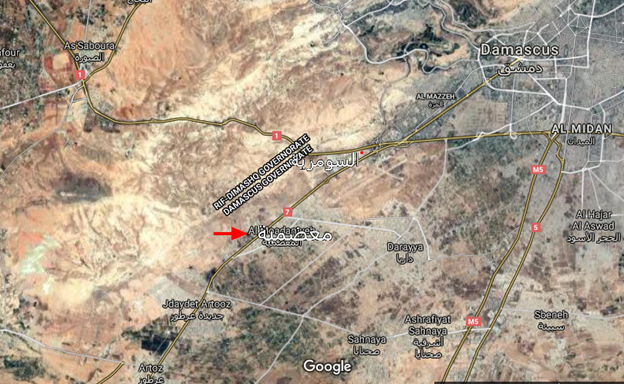