Informally built neighbourhoods surround the city of Damascus, forming a belt that extends from Barzeh to Qaboun and Jobar in the north, and from the Yarmouk Palestinian refugee camp to the Tadhamon neighbourhood in the south, reaching the foot of Mount Qasioun in the west. There are nearly 18 of these informal neighbourhoods, taking up around 2,000 hectares of land. They were home to some 1.2 million people before 2011.

These informally built areas, known as ashwa’iyat, are neighbourhoods containing large-scale building violations, which are any buildings constructed without a license. This can also refer to housing built outside the boundaries of official zoning plans, no matter the legal status of the land. Land ownership varies in Damascus’s ashwa’iyat, from communally owned properties to public properties and agricultural lands.

Most of these ashwa’iyat began appearing in the 1950s, expanding rapidly in the 1970s. According to a study published in 2015 in a Damascus University academic journal, 55 percent of informal housing in the city’s ashwa’iyat was constructed between 1965 and 1990, compared to 37 percent constructed after 1990.

Informal settlements grew around Damascus due to its low real estate prices relative to those in the city proper which attracted migration from the countryside, in addition to issues related to the absence or delay in issuing official zoning plans for these districts as they swelled. The state has also fallen short on government and cooperative housing policies, often implementing such projects slowly.

Damascus’ latest zoning plan, issued in 2001, divides the city’s ashwa’iyat into three levels. The first, denoted by (0), includes the areas classified as “in the process of being regulated”, such as Mazzeh 86, Al-Dahaadil, Al-Dweilaeh, Al-Tabaaleh and Al-Tadhamon.

The second level (01) is for areas in need of detailed zoning plans, and includes Qudsaya, Bustan Al-Roz, Al-Asaali, Def Al-Shouk, Hayy Al-Qazzaz, Bustan Al-Dour, the Jaramana camp and its surroundings, the foot of Mount Qasioun and Ish Al-Warwar.

The third level (02), is considered the least urgent. It includes scattered informal neighbourhoods that do not constitute large urban outgrowths. It also includes fertile agricultural lands, or areas located along dangerous lines of tension or along some main roads.

According to Damascus governorate officials, the general guidelines for dealing with ashwa’iyat are also split into three categories: demolition and reconstruction; improvement and rehabilitation; or any combination of those methods, to be proposed by a new draft law for real estate development.

Legislative authorities issued Real Estate Development and Investment Law No. 15 of 2008 and Urban Planning and Urbanisation Law No. 23 of 2015 to address real estate problems related to informally built areas. Decree No. 66 of 2012 was issued specifically to set up two new organisational zones over wide swathes of land in Damascus, some of which included ashwa’iyat such as Basateen Al-Razi. Law No. 10 of 2018 then extended the scope of Law No. 66, to include all of Syria.

However, there is a great need for the Syrian government to issue new laws that address questions of Damascus’ ashwa’iyat, as these areas faced massive damage over the course of the war. Residents of many of these neighbourhoods rose up against the regime. Some of the neighbourhoods subsequently became opposition strongholds from 2013 onward, facing systematic regime bombing until opposition groups based there surrendered and residents were forcibly displaced to other parts of the country.

A map of the informal neighbourhoods surrounding Damascus. 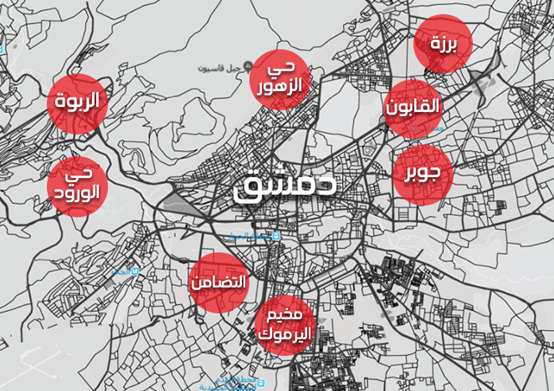