In January, the Aleppo City Council carried out a major campaign to remove what it calls “building violations” in the eastern half of the city, claiming to carry out the terms of Legislative Decree No. 40 of 2012 regarding the demolition of buildings that are deemed to be in violation of the construction code.

Although the regime has been demolishing buildings at risk of collapse in eastern Aleppo since it recaptured control of the area in late 2016, the latest campaign has been the largest and impacted the highest number of buildings. The campaign in Aleppo comes alongside a broader, similar campaign to implement Decree No. 40 of 2012 in areas across Syria under government control.

Aleppo’s city council head, Maad Al-Madlaji, formed a committee at the start of the year to implement focused demolitions campaigns. The committee would carry out two rounds of demolitions per week, in cooperation with governorate service directorates and security branches. Throughout January, the committee, reinforced by Military Security forces, demolished properties in the neighbourhoods of Al-Ferdous, Al-Saleheen, SalahEddine, Seif Al-Dawleh and Al-Ameriyeh. These neighbourhoods belong to the Bab Al-Neirab and the Al-Ansara service sectors. Aleppo city has six service directorates in total, each of which services a residential sector and includes a number of neighbourhoods.

All the properties that were demolished in January’s campaign were in the eastern neighbourhoods of Aleppo, with most constructed during the period of opposition control over the area from mid-2012 to late 2016. A smaller number of the targeted buildings were constructed after regime forces recaptured eastern Aleppo.

According to a correspondent for The Syria Report in Aleppo, up to 150 properties were demolished during the first month of the campaign alone, while the Aleppo City Council only announced up to 40 building violations demolished. The campaign could continue, the correspondent added, likely escalating in the coming months.

The city council relies on Baath Party informants in Aleppo to prepare lists of “building violations” slated for demolition. However, it is difficult to actually distinguish buildings in violation of the construction code amid the remaining destruction and rubble that covers eastern Aleppo. The “violations” themselves are oftentimes additional storeys, residential annexes onto existing buildings, or even sections of buildings that have been restored without a restoration licence. Also, the demolitions have targeted properties owned by the displaced, low-income people or those who do not have connections within the Aleppo City Council, militias, or security services.

Several the buildings classified as “violations” targeted in the demolitions campaign had been included on building lists based on suggestions from the militias now in control of eastern Aleppo. Those militias include Liwa Al-Baqr, Failaq Al-Mudafaeen Aleppo and the Lebanese Hezbollah. They have an interest in demolishing some of these buildings after their owners refused to sell them, or because the process of seizing the buildings was difficult as residents refused to leave them, among other reasons. Demolition of these buildings has placed pressure on others who refuse to sell their properties in the area or reduce their prices.

The demolition of a “building violation” in the Al-Ferdous neighbourhood. 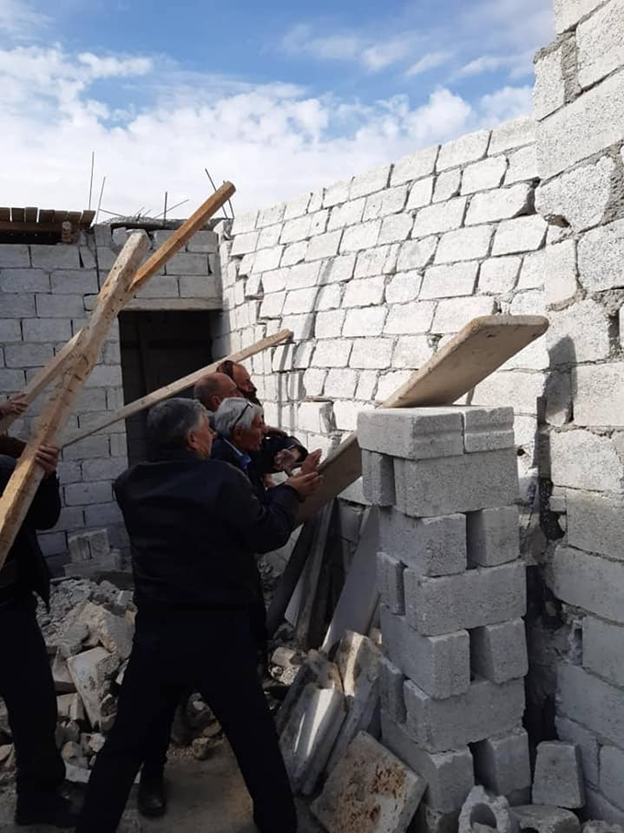