The Lattakia City Council announced on May 12 that it had issued the city’s periodic general master plan and would open it up for objections for a period of one month.

Under the urban planning Legislative Decree No. 5 of 1982, the periodic general master plan is a recurring announcement of a general master plan released after including amendments resulting from previous objections. The plan is announced one year after first being issued, and then every three years after that to field any objections. The administrative body has the right to propose amendments until the plan is approved in its final form.

The first general master plan for Lattakia dates to 1950, with an area of 1,200 hectares. Three amendments were made to the plan throughout the 1960s as the city developed and expanded. The new general master plan was issued in 1984, coordinated by the city council and the General Company for Engineering Studies (GCES), which is affiliated with the Ministry of Public Works and Housing. The updated plan was meant to be announced for the first time in 2001 but was postponed several times to “keep pace with urban development” in Lattakia, according to the city council. It was finally issued in 2008 but was not ratified due to an onslaught of objections. The plan received more than 13,000 objections, 62 percent of which came from property owners in informally built neighbourhoods and 25 percent of which came from agricultural landowners. In one sign of the 2008 plan’s disarray, 23 public parks and 27 schools were approved for the Al-Datour neighbourhood alone, which at the time contained seven schools, two of which were vacant.

The plan was finally approved in August 2016, signed by the Minister of Public Works and Housing within Ministerial Decree No. 252. The decree attributed the delay to amendments addressing the large number of objections. Decree No. 252 also stipulated that the zoning of informal housing areas would be carried out under Law No. 23 of 2015, through separate plans, to be issued later. In all, there were 1,235 objections to the 2016 plan.

The plan was re-announced one year later in 2017, though the second periodic announcement was delayed to May 2021 instead of 2020. The 2021 periodic general master plan for Lattakia city extends over 8,000 hectares and includes eight informal settlements.

In addition to repeated amendments made due to objections, the 2017 zoning plan added the village of Saqubin within the Lattakia city limits. The municipality had previously decided to annex Saqubin in 2011, but the general master plan at the time did not reflect the change. Saqubin is three kilometres from Lattakia, though informally built neighbourhoods of the city reached as far as the village. In 2019, a general master plan for Saqubin was issued separately, receiving 21 objections, some of which were studied and then approved.

In Syria, after a general master plan is completed, a detailed master plan must be drawn. The absence of any detailed master plan, or urban planning that keeps pace with a city’s population growth, causes problems for property owners, who then face difficulties obtaining construction permits. Meanwhile, informal housing areas continue to grow as the government remains unable to address housing crises. 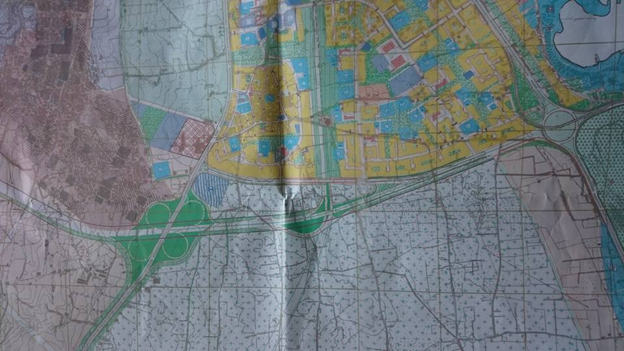